The Dog With The Hollywood Smile 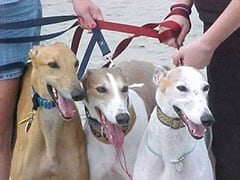 Orlando, FL. Who says dogs don’t smile? At a press conference conducted at the Global Pet Expo, March 26, I announced the Winner of the Superstar Smiles Photo Contest, sponsored by Petrodex (a brand of pet dental products).

There were about 2,000 online entrants. The dog with the brightest smile, a 5-year old Greyhound named Comet from Boynton Beach, FL was named the winner. It turns out Comet has quite a back-story.

Living up to his name, Comet and was a top racing Greyhound competing in big money races. All was going great for him until he broke a leg in a race about three years ago. With his superstar track status, surgery was paid for, and even rehabilitation, with hope of getting Comet back to speed. But that was not to be.

Barbara Masi, the Florida coordinator of Greyhound Pets of America, took Comet in with the intent of finding a Foster family to place him with, and then to adopt him to a forever home. But there was one problem. “He has lovely eyes, and he kept looking at me like he was asking to stay,” Masi says.

Comet got his way, and today lives with two other Greyhounds and one Irish Wolfhound puppy in Masi’s home.

About getting that puppy, Masi says, “I think I need a psychiatrist. It’s been 20 years since I’ve had a puppy. Now, I’m reminded about why adopting an adult dog, like a Greyhound, is such a good idea.”

Masi continues, “People think Greyhounds are hyper dogs because they’re fast (reaching speeds of about 45 mph); they’re sprinters not long-distance runners. Sure, having a fast sprint around the yard is nice, but after that their favorite thing to do is to sleep. They’re the largest lap dogs. With a Greyhound nearby your leg becomes a pillow.”

While some Greyhounds’ prey drive kicks into high gear around cats or small dogs, making them a real threat do to serious harm – most Greyhounds are fine with those small furries.  Masi says Comet is one of those Greyhounds who might hurt a small cat, so she’s very careful when Comet is out in public.

And it turns out that Comet’s bright smile is seen by many. Masi calls Comet an ‘Ambassadog.’ He makes appearances for the Palm Beach County Sheriff’s Office, turning up at schools and various public events, like a recent Strawberry Festival. Masi uses Comet and often Bullet (another of her Greyhounds) to dispel myths people have about Greyhounds, to teach animal kindness to kids, and sometimes just to stand there and be petted – something Greyhounds are particularly adept at.

All dog breeds, from Affenpinschers to Yorkshire Terriers, have rescue groups associated with them. However, no breed requires as much consistent help from rescue as Greyhounds. Gary Guccione, coordinator of the American Greyhound Council in Abilene, KS says that last year around 20,000 Greyhounds were rescued or given up by tracks to be adopted.

Guccione expects that number to remain relatively stable unless more tracks close down – meaning all the dogs from the shuttered tracks will need homes. He says today there are around 24 racing tracks in America compared to nearly twice that number just five years ago. So, Greyhound rescue has been very busy attempting to place their dogs.

Sometimes newly adopted Greyhounds need to be taught to climb stairs, and might take some time to become accustomed to the strange sounds of dishwashers or electric can openers. These dogs are accustomed to living in track kennels and not homes.

Guccione says Greyhounds are like potato chips – you probably can’t just have only one. Growing up their entire lives around other Greyhounds, the dogs seem to appreciate company of their own kind.

Masi says that many Greyhounds seem to be grateful that they’ve been taken in. Comet, she says, always smiled. And that smile sparkles because she really does brush her dog’s teeth. “Greyhounds have notoriously poor teeth and have problems with anesthesia – so we promote good dental care so they don’t have to have their teeth cleaned too often. “

As for how the Comet, the dog with the superstar smile feels about winning the contest over a few thousand other contestants, Masi says, “Positively radiant! He even got up from the sofa.”