The Pandemic Could Have Been Avoided: Blame Wet Markets

I am saddened by the division happening in America. Historically, after national (or international) tragedies, our leadership and our collected patriotism typically brings us together, as political affiliation in these times becomes irrelevant. To be sure, there’s been some of that. 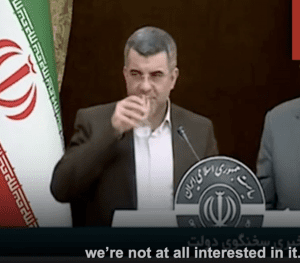 This is Iraj Harirchi, Iran’s deputy health minister, as he maintained no social distancing is necessary, “We’re not at all interested in it.” Even as he was giving this speech he was ill and diagnosed a day later with COVID-19. He survived.

However, there are millions of Americans who actually believe the novel corona virus is a political hoax or no worse than the influenza virus, despite the FACT (as of May 10) nearly 4 million humans on earth have been confirmed with the novel corona virus, COVID-19, which stems from a SARS virus known as SARS CoV-2. ALL experts (and common sense) concur the number in reality FAR exceeds 4 million, as testing in many places wasn’t up and running early on and many people are still not tested or even diagnosed, particularly in so-called third world nations.

Exaggerated? Made up numbers? Tell family members of those who have died as a result of COVID-19. Tell the first responders and medical professionals, who may be risking their lives to save your life.

There is no hoax.

This pandemic happened for only one and one reason alone. The world has allowed this pandemic.

Many governments, including our own, have ignored warnings from the likes of activists/naturalists Sir David Attenborough, Dr. Jane Goodall and dozens of scientists from nations around the world, including our own.

How This Pandemic Compares

Spanish Flu pandemic, beginning in 1918, was an H1N1 flu derived from a bird – likely poultry kept in confined and by today’s standards outrageous conditions all closely associated with people.

The first SARS coronavirus (SARS-CoV) emerged in November 2002 and caused severe acute respiratory syndrome. It seems clear that this virus emerged from bats, and likely a species of civet as an intermediary host in a wet market in China. The planet was lucky, the virus wasn’t especially virulent, and disappeared on it’s own by 2004. SARS killed nearly 10 percent of those infected, and just over 800 worldwide died.

The Middle East Respiratory Disease or MERS began as outcome of close association with camels in the Middle East in 2012, and that disease petered itself out after causing mostly localized outbreaks. About a third of people who were unlucky enough to contract MERS died, including two Americans among 866 deaths worldwide.

Arguably, we’ve been lucky – until now.

International Pressure to Ban Wet Markets, And Versions of that in the U.S. 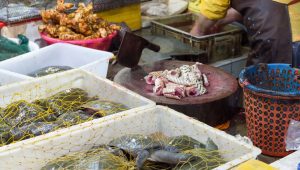 As human society around the globe does a reboot – the hope is that we’ve learned our lesson. While some suggests this pandemic, caused by the novel corona virus began in a lab in China, most scientists suggest the wet market across the street is the more likely culprit. Even if the virus did escape the lab, further mutations may have occurred in that market. 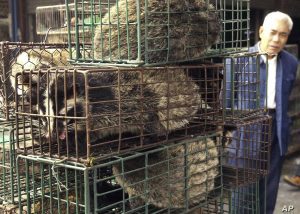 You may have heard the term wet markets – we visited one in Thailand. Here’s what happens at these markets: Animals are butchered on site in unhygienic not to mention inhumane conditions. Varying species – including endangered and illegally trafficked animals are maintained and killed in close proximity to one another.So, you have food production animals, bats, various rodent species (some being butchered others eat scraps and randomly deposit their dropping), dogs who are still killed at some of these places, monkeys (remember our close association to non human primates), various types species of birds, fish species and reptiles, and the list goes on and on. Being so incredibly stressed and terrified, these animals are even more likely to shed disease. The remains of one butchered species is bound to be mixed in with another.

Workers are bound to become sick from a long list of like salmonella or e-coli, all that is routine and not spread outside the markets – but nonetheless may be deadly.

While the animals in swap meets and other markets in America aren’t typically butchered on site, and only rarely are endangered animals on display, aside from considerable humane issues, there is also the potential the potential for disease transmission. Our own government has not stopped this practice.

The U.S. has yet to mandate medical inspection on wildlife entering the U.S. 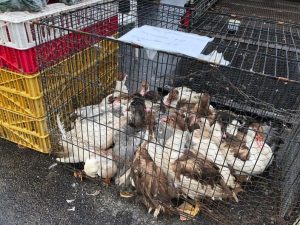 from a swap meet in Kankakee, IL

At airports, seaports, and land border crossings in 2019, $4.3 billion of legal wildlife and wildlife products was imported into the U.S. Approximately 200 million live animals are imported to the U.S. annually, according to a five-year trade report: 175 million fish for the aquarium trade, and 25 million animals comprised of an array of mammals, amphibians, birds, insects, reptiles, spiders, and more. On top of that, thousands of illegally traded shipments of wildlife are intercepted each year. In 2019 alone, the agency opened more than 10,000 illegal wildlife trade investigations.

The problem isn’t unique to the U.S.—most nations do not have a government agency that comprehensively screens wildlife imports for pathogens

And one day a price will be paid. It almost happened in 2003. People in six U.S. states became ill from exposure to the monkeypox virus after it entered the country in a pet trade shipment of 800 rodents from Ghana. In that shipment, African giant pouched rats, rope squirrels, and dormice carried the virus. It spread to prairie dogs held in the same pet trade facility, which were then sold to the public, starting the animal-to-human outbreak. Luckily – and again only good lucky – human to human community transmission didn’t occur. But it might have happened.

Amphibian chytrid fungus, the aquatic fungal pathogen Batrachochytrium dendrobatidis, is the first disease known to infect hundreds of species simultaneously and drive many of them toward extinction. It’s so dangerous because it can jump between nearly any amphibian—a class with more than 8,000 species. It’s only, again a matter of pure luck, humans can’t get this disease. But as I write this amphibians are dying of this rarely spoken about problem, and it does impact all of us.

You’d think China would be all over the idea of closing these markets, following what COVID-19 has done to that nation’s economy. However, they’ve only suggesting that closing will happen and few believe that it really will. These wet markets play an integral in the Chinese economy, and even have lobbyists of their own:

U.S. Leadership has been Non Existent

Leadership in places like Costa Rica and in the UK are examples of what should be happening. In the UK, for example, Princes Princes Harry and William and for many years Prince Charles have ardently supported wildlife conservation, as has Queen Elizabeth herself. In the U.S. the sons of our President revel in their enjoyment of big game hunting, while President Donald Trump has supported gutting laws that protect the environment. This isn’t a point to be political – it is only the truth.

Several things need to happen and soon: We need to close down the wet markets in the Far East, and also their equivalent in the U.S. And a broader awareness of our planet and the environment we share with other creatures must be paid close attention to, led by international scientists (not public officials).

At 94-years old, we won’t have Attenborough around all that much longer to pay attention to. He recorded this warning on YouTube video in late September 2019. Sadly, he was correct.

As people like Attenborough and Goodall, and other scientists speak up, Americans sometimes attempt to politicize what they’re saying. They can care less about American politics – except that many public officials continue to make mistakes which cost lives. True enough, these markets that are the most egregious and mostly likely to be a cesspool for the start of another pandemic aren’t in the U.S. but instead are in China and other nations of the Far East.

International pressure must be used if we are to assuredly see these markets close forever. It’s more than that, it’s about paying attention to our climate, it’s about saying what veterinarians around the globe have been saying for many decades – we are all interconnected, humans and all other species. What happens to one species will impact another and still another and yet another, and ultimately work their way up or down to us.  Ignoring this fact is ignorance which will only lead to further problems for our species.

I had the opportunity to interview Dr. Goodall last year, it was a wide-ranging interview but like Attenborough she says our species only has a chance if we take positive action.