Veterinarians Have a Choice: Make Your Own Rules or Be Legislated: Declaw is One Example 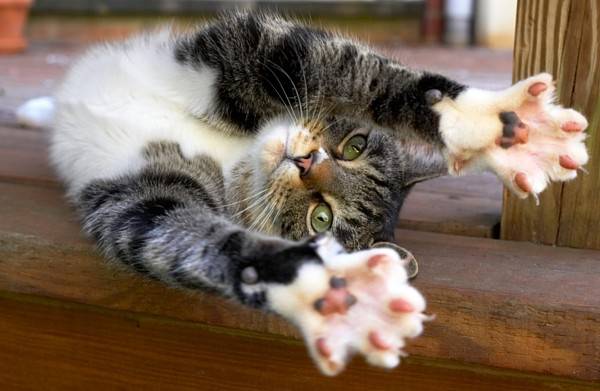 There are a myriad of emotional issues which pet parents are increasingly more informed and passionate. The good news is that the human-animal bond is more palpable than ever, driving this passion.

I wrote in Veterinary Practice News how organized veterinary medicine may not be keeping pace with this passion, or even the attitudes and beliefs of their own members, especially students, newer graduates and most veterinary technicians/nurses.

One example is onychectomy or declaw of domestic cats. Last year, Denver approved a ban on declaw, which follows Los Angeles, San Francisco, Santa Monica, Berkeley, Beverly Hills, Culver City, West Hollywood and Burbank all in California with their declaw bans, and with this momentum other cities, states and Canadian provinces are considering the same. 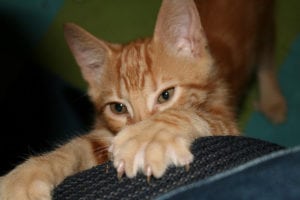 Entire provinces in Canada, British Columba and Nova Scotia have banned the practice – but there’s a difference in the way Canada has approached this. The bans come from veterinarians themselves.

The Colorado Veterinary Medical Association offered perfectly logical objections to the proposed ban on declaw, mostly focusing on the fact that many veterinarians only declaw as a last resort – if they ever even declaw at all – but it should never be government’s job to direct medical care.

Make sense or not? I suggest, it doesn’t matter.

If veterinary medicine doesn’t keep pace with the public (and their own membership), they will be legislated upon.

Meanwhile, veterinary credibility to the general public will suffer. The perception of a considerable number of pet parents is that the profession is simply out for the money when they declaw or as another example fight against bans against dogs and cats being sold at pet stores (indeed, they are from commercial facilities or puppy mills). 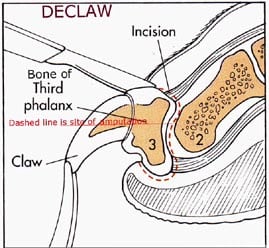 Thank the Internet, increasingly people have learned what a declaw is

This email (from a reader in Colorado) begs a question, which I can’t fully answer. “A declaw is an elective amputation. Why would a veterinarian do that if money wasn’t at least some motivating factor?” Other emailers weren’t so composed. “Those money grubbing fools – shame on veterinarians who declaw. Let’s cut off their fingers and see how they like it?”

This issue is so fraught with emotion that individual veterinarians and practices who outwardly declaw are sometimes threatened, or even attacked in social media. I’m most certainly not about to defend those bullying tactics. That’s wrong, very wrong – period.

However, I will say that the reader is correct about declaw being an elective amputation in nearly every case. As the American Association of Feline Practitioners position statement suggests, appropriate behavior modification should be communicated to pet parents.

However, that takes time and expertise to describe, and pet caretakers have to be willing and able to follow recommendations.

Clients aren’t always so willing to take a step-by-step approach; they desire a quick fix.

Well, now that quick fix is available, Feliscratch is a product that directs cats to “scratch here” on a vertical post. 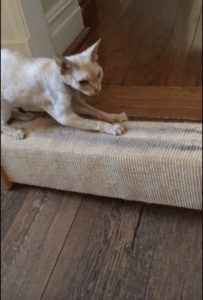 The blue dye is a visual marker, catnip is an attractant from several feet away, and the real secret sauce in the product to encourage scratching is the synthetic feline interdigital semiochemical pheromone (which cats naturally deposit where they scratch). This product alone, and better with behavior modification, persuades cats to scratch where we like, as long as posts are placed correctly, there are enough posts in the home, and the cat isn’t concerned about other anxiety-inducing issues (such as inter-cat aggression).

So, with an increased ability to direct cats to scratch in all the right places, combined with mounting public pressure, why would veterinarians oppose laws to ban declaw? 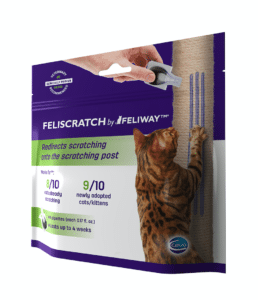 In fact, an increasing number of the profession’s most respected key opinion leaders have begun to speak out very publicly in opposition to declaw. Dr. Margie Scherk, editor of Journal of Feline Medicine and Surgery launched the petition drive to ban the practice in British Columbia (where she lives).  And her support and the activism of others within the profession in BC led to the recent ban on declaw there.

What’s more VCA hospitals in Canada have just proactively announced that they have banned declaw. That’s nearly 100 veterinary hospitals saying “no more.” This is a sure public relations win among cat lovers who understand what a declaw really is.

Dr. Robin Downing, a renowned expert on treating pain and on bioethics testified in Denver and has written about her support to ban declaw.  “We know from pain and neurology research that companion animals are wired precisely as we are,” she writes. “When nerves are cut – – as they are in feline toe amputation – – the probability that the cat will develop neuropathic pain is exquisitely high. These cats can go on to develop many different aberrant behaviors. These may include: reluctance to walk on certain surfaces reluctance to jump onto or off furniture, window ledges, etc. and over-grooming.”

One traditional argument is that if cats continue to scratch inappropriately (and not declawed) they will be given up to shelters. However, with the pheromone product and behavior modification, the behavior can be curtailed. No matter, according to a 2015 paper published in Applied Behavior Science from Saethra Jade Fritscher and James Ha called “Declawing has no effect on biting behavior but does affect adoption outcomes for domestic cats in an animal shelter,” declawed cats are more actually more difficult to adopt. And there’s all sorts of new research documenting deleterious physical effects of declaw, including a report from Nicole K Martell-Moran, Mauricio Solano and Hugh GG Townsend called “Pain and adverse behavior in declawed cats,” published in 2017 in the Journal of Feline Medicine and Surgery. 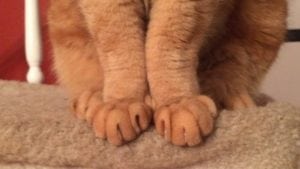 Yes, I have a position regarding declaw – make no mistake. But this column isn’t meant to be about my viewpoint as much as it is to be about using declaw as one example of how I believe the veterinary profession must listen more carefully to what clients are saying, and their own membership. For some issues, there appears to be a generation gap.

I realize millions of cat caretakers still declaw. Or at least they want to. But veterinary professionals are supposed to be not only medical experts but also our pets’ advocates, who should be saying, “Wait, not so fast.”

Most do. Many still do not. Some still routinely recommend declaw with spay/neuter, which is archaic.

Here’s the reality: If veterinarians can’t legislate themselves, increasingly public officials – right or wrong – will do the job for them.