This post is very personal.  Veterinary Appreciation Day (June 18) is, for me, a holiday. I was covering entertainment for a couple of national publications when one asked to do write a piece on Oprah Winfrey throwing shade. A couple of ex-producers wanted to tell their “real story,” and it wasn’t going to be complimentary. At first, I begrudgingly accepted, and began reporting but I didn’t file a single word. I saw the way entertainment reporting was moving, and I refused to be that reporter.

With a dog who changed my life, nearly 30 years ago, named Chaser

I had been writing about pets for the Chicago Tribune, and others, like Cat Fancy and Dog World. And when I interviewed celebs, I was often asking them about their pets – like Oprah. I was the first to write about her beloved Cocker Spaniels.

At around the same I was asked to write a syndicated pet column for Tribune Media Services. I ultimately said yes, but had no idea how much my life would eventually change.

I authored that column for 22 years. Who knew it would lead to becoming a certified animal behavior consultant, authoring and contributing to books (including veterinary textbooks), hosting two national radio shows, appearing as a ‘pet expert’ on many TV programs and speaking at veterinary conferences and events around the globe. And at these conference, sometimes sharing the stage with absolutely brilliant veterinarians.

How lucky and privileged am I?

And here’s what I have learned is true, not only about veterinarians but also veterinary nurses and technicians, as well as veterinary care coordinators. 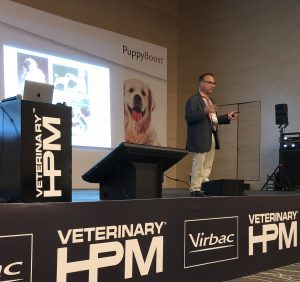 An honor to present a veterinary conferences around the globe

Yes, it’s true veterinary practices – both operated by industry or privately owned – are not non-profits. But individual veterinary professionals – while they deserve to make money, only exceedingly rarely put dollars ahead of pet care. They didn’t go to vet school or technician school to become rich. If that was the objective, I can assure you, they would choose another profession. (Those few who put dollars first may ultimately pay a price themselves).

And most veterinarians – sometimes to the determent of the own mental health, live their work. I could offer dozens of examples. I was set to speak at a conference with Dr. Robin Downing, and simply said hi when we met to go over the talk, and asked “How are you?” On the verge of tears, she said, “Yesterday was the ***tiest day ever; I had to euthanize four animals. I’ve known each them forever. We lost family.”

It’s a long story – and I won’t use this veterinarian’s name for fear this “challenged client” might even read this post. The doctor didn’t communicate by phone but rather she texted about the pet. No questioning the care or the quality of medicine, and she was verbally attacked because she texted. He threatened to go on to social media and ruin her career. And, incidentally, this veterinarian is understood among her colleagues to simply be among the best. 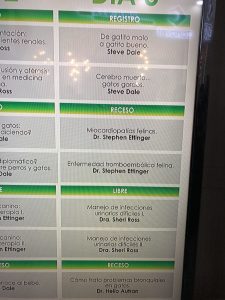 Here I am, on the same bill as Dr. Ettinger (at a conference in Columbia), as well as the amazing Dr. Sheri Ross. And both have heard me speak. #amazing

On a daily basis – shockingly people leave a pet office never to return. So many veterinary professionals get their pets this way.

Dr. Ettinger didn’t say a word; the silence was palpable. He just starred for the longest two seconds ever recorded. He reached out his hand to mine and shook it. And said, “You understand.”

I can’t possibly name all the people in veterinary medicine who played a role model role for me, many I’ve come to regard as friends.

Pets are members of the family, and what Dr. Sheldon Rubin has been saying for decades is even more true today, “Veterinarians are your pets’ second best friend.”

I’m honored to be associated with veterinary medicine, and honored you who work in the profession – especially at this time. Indeed, former First Lady Laura Bush was right to call you out as essential workers. I think Veterinary Appreciation Day is every day.