Horse-drawn carriage rides have been common in cities around the world for decades. One problem is that we live in a different world today. And another is that Chicago, at least, carriage drivers are allegedly frequently not adhering to the safety and comfort of the horses first, or even Chicago’s current ordinance.

Here’s what I’m talking about:

Jodie Weiderkehr of Chicago Alliance for Animals, who will be on the air with me Sunday (September 1) 6:35AM CDT on WGN Radio, notes that one problem is the way which the horses are treated. In fact, on Wednesday August 28, a horse from Antique Coach & Carriage was ordered by Chicago Animal Care and Control to return to the stable for veterinary care because of open sores on his legs/feet and was limping. Watch that video HERE. 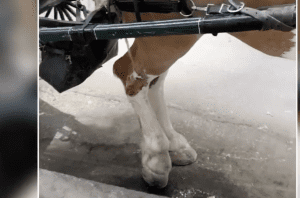 Meanwhile, as the summer season ends and tourists arrive for the Labor Day holiday, the Chicago Alliance for Animals Facebook page alleges horses are being overworked, even up to 10 hours at a time. That’s well beyond what the current ordinance or even common sense allows. According to the Chicago Alliance for Animals Facebook page, “The horses also did not have a water bucket at the stand and hardly ever were allowed to stop and drink from the fountain. In addition, the horse carriage operators broke many other laws that impact public safety.”

The problem is that these alleged offenses go on all the time. Personally, if indeed the carriage riders and companies adhered religiously to the welfare of horses, I would have no issue. Unfortunately, even the stables where the horses are maintained and their veterinary care (or lack of it) has been called into question, not to mention working long hours and without water and at times in weather all too typical of Chicago.

In addition, while the horses and carriages are a throwback to a bygone era – they’re living on busy streets, as buses and autos make their way around them. Accidents occur more frequently than people know. And daily the horses are breathing in auto and bus fumes.

Here’s some Chicago history: In 2014, Ald. Ed Burke (14th) proposed banning horse-drawn carriages saying they’re a traffic hazard, a nuisance, and are cruel to animals. At the time, Burke was head of the  City Council Finance Committee, but he resigned from that post last year amid federal corruption charges. Burke has historically not been an Alderman particularly on the side of animal welfare throughout his career.

Chicago is not the only city where carriage horses have been the subject of controversy. As Chicago’s proposal got mired in politics, Salt Lake City, UT; Biloxi, MS; Camden, NJ; Key West, Palm Beach, Pompano Beach, and Treasure Island, FL have all banned horse-drawn carriages.

In 2013, in New York City, Mayor Bill de Blasio pledged to replace the carriages with electric old-time style cars that would still appeal to tourists, a brilliant idea. But de Blasio later backed down, instead supporting a reduction to the number of carriage horses operating in Central Park and using public funds to move horse stables to a refurbished stable within the park. And earlier this year, New York City also approved a rule forbidding horse-drawn carriages from allowing people to board in the street.

Carriage drivers are not Uber drivers, and horses aren’t cars – they’re living breathing and feeling modes of transportation.  It’s a shame it can’t all be worked out, because people do enjoy the carriages. But clearly, for far too long, the economic welfare of operators is valued most – not the welfare of the horses. Perhaps, de Blasio’s idea can be reconsidered for New York and Chicago. So for right now, visit the Lincoln Park Zoo and enjoy a ride on a vintage horse (and wild animal) carousel.