In 1989, CITES (the Convention on International Trade in Endangered Species) issued an international ban on the ivory trade. Despite this, legal trade still exists in many countries, including Japan, and the black market continues to do a brisk business, more business than ever before. In many cases, poachers out weaponize game wardens, and governments even back the poachers publicly or behind-the-scenes. 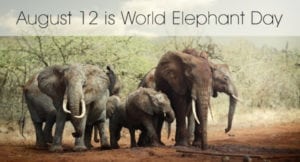 Habitat destruction and human conflict with elephants also play a role as well, and the result is that elephants are losing the race, as all three species are endangered and suffering: African Elephants, African Forest Elephants and Asian Elephants.

In an effort to call attention to the giant mammal’s giant problem, August 12 has been named World Elephant Day.

In 2016, the United States adopted a near total ivory ban. Now, the Trump administration has lifted a ban on importing sport-hunted trophies of elephants from certain African countries, and the U.S. is now a part of the elephant problem. The defense is that money from legal hunting with diminish illegal poaching and also those dollars go back to conservation. However, even if you consider it ethically acceptable to shoot these intelligent animals and in doing so break up families – these theories do not turn out to be true. However, ecotourism can help elephants (and other species). 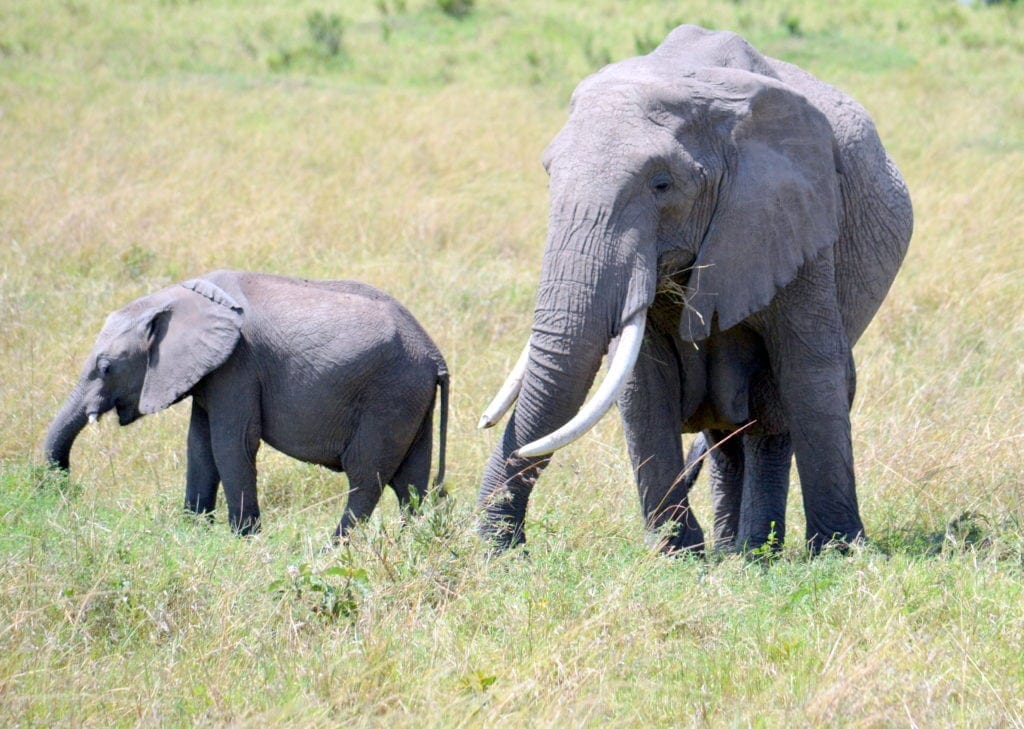 Big tuskers such as this elephant are increasingly rare in Africa

As for the number of elephants remaining, an aerial survey covered 18 African countries to look at African elephants. In 15 of those, where information on previous populations existed, 144,000 elephants were lost to ivory poaching and habitat destruction in less than a decade, about a 30 percent loss, according to National Geographic. The current yearly loss—overwhelmingly from poaching—is estimated at eight percent. That’s about 27,000 elephants slaughtered year after year.

Forest elephants, which live in central and West Africa, were excluded from the census because they’re nearly impossible to spot from the air. 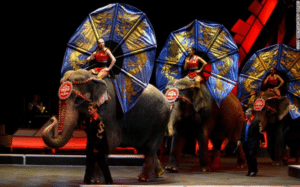 This image now a part of history

With all this, has come public awareness. Millions around the world are now horrified of images of elephants being round up and shot,

On his verified Twitter account, Donald Trump Jr. has remained defiant, “I’m not going to run and hide because the peta crazies don’t like me.”
This isn’t “fake news,” as graphic images of the Trump children celebrating their kills are readily available on this YouTube link and elsewhere on the internet. 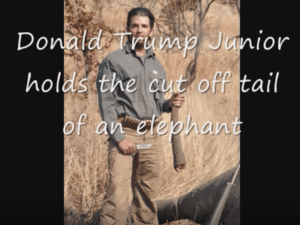 Back in 2015, I reported that then-candidate Trump said that he believes his sons aren’t wrong to hunt. At a press event in Ayrshire, Scotland, during the Women’s British Open, he said, “My sons love to hunt. They are members of the NRA, very proudly. I am a big believer in the Second Amendment.”

It’s not only a matter of poaching, elephants may conflict with human settlements – and when that happens with any species, it’s not our species that losses. Some creative means to live side by side with elephants are succeeding.

Meanwhile, Princes Harry and William of the U.K. are doing all they can to protect the future of the world’s wildlife, including the elephants, one can only hope their ethics and ideals will hopefully win the day.

Consider that elephants also impact the environments they live in – from the top down. So when they go away, other plant and animal species are impacted. For example, the clearing of trees makes it possible for many other foragers to follow in the wake of elephants; elephant in times of drought create water holes (by digging – living bulldozers) to sustain life of dozens of species; and they are even primary pollinators. Without elephants, it’s not exaggeration to suggest our planet wouldn’t be quite the same – and that will – believe it or not impact all of us. Still I return to this question, “Why kill them?” And now our own country is on the wrong side of this issue – and that is shameful.