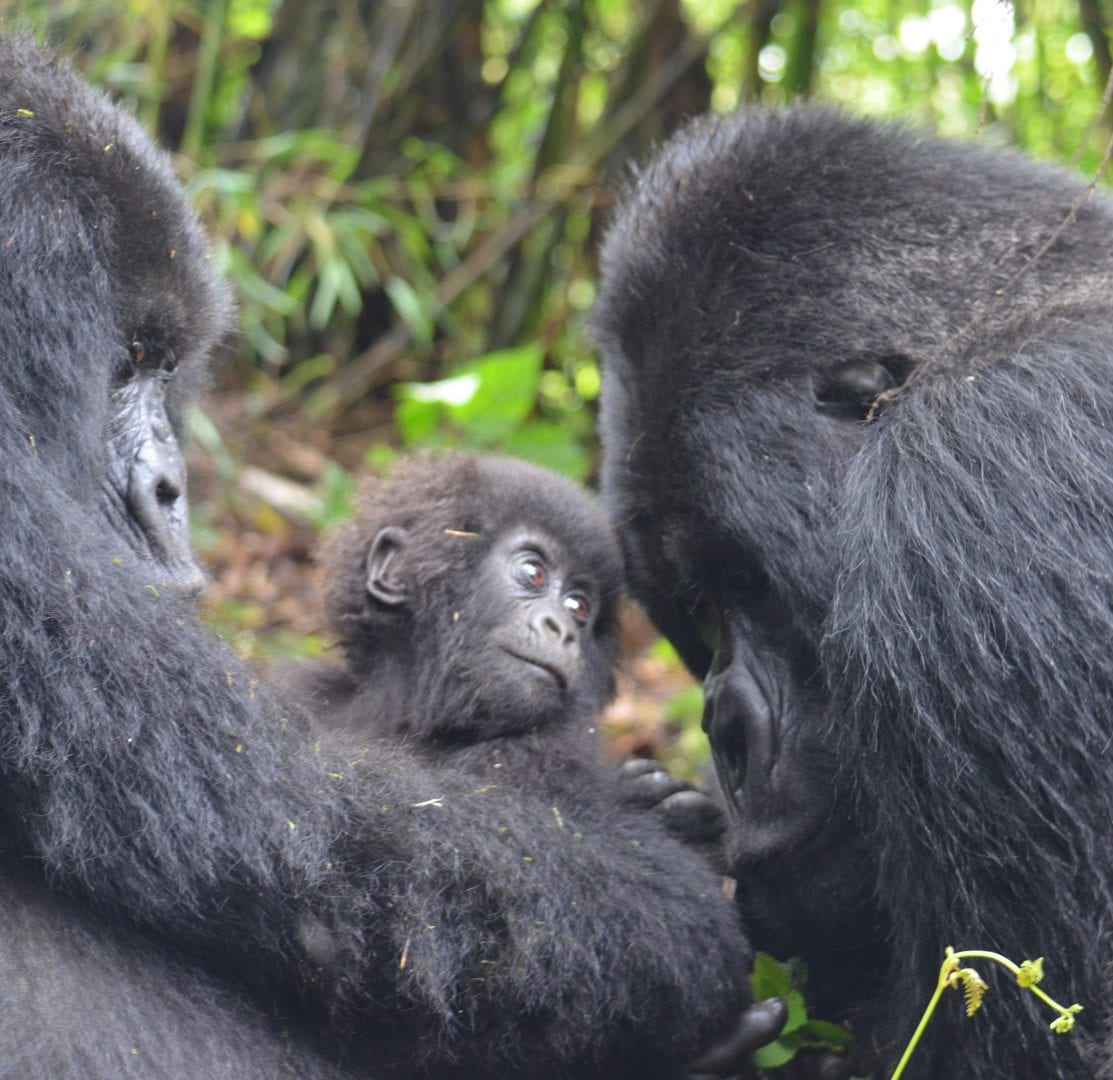 Privileged and emotionally overwhelmed is how we felt when we hiked through brush and bristle in the Virunga Mountains in Rwanda, Africa to see Mountain Gorillas close up and personal. Indeed, we’ve been to wild places and have seen species ranging from New Zealand Blue Fairy Penguins to African Elephant. Somehow this was very different. It’s clear you’re seeing a bit of yourself in these gorillas. And indeed, there is a bit of ourselves (genetically) in gorillas. Today is World Gorilla Day, dedicated to support gorillas and their conservation, as well as dispel gorilla myths.

It turns out that ecotourism has saved the Mountain Gorilla from extinction. Their numbers were once that low. Today, in Rwanda (one of the three countries mountain gorillas are found; Uganda and Democratic Republic of the Congo are the others), there are just over 250 mountain gorillas. And the nation earns just over $250 in ecotourism. So, that’s about a cool million per gorilla. That money not only supports the great ape’s protection, but also goes to schools and infrastructure and especially into the local communities where the gorillas are found near. Clearly, Mountain Gorilla protection definitely benefits people living in Rwanda.

I know how safe and welcoming it is in Rwanda – particularly with escorts, which are the only way to see the Gorillas up close and personal anyway, such as Ecotours.com. 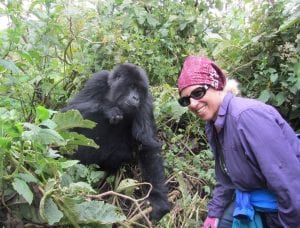 my wife’s close encounter with a wild Mountain Gorilla

However, the gorilla story goes well beyond one species.

*Western Lowland Gorillas can be distinguished from other gorilla subspecies by their slightly smaller size, their brown-grey coats and auburn chests. They also have wider skulls with more pronounced brow ridges and smaller ears. You never see Mountain Gorillas in zoos, but often times these guys are in captivity. Because of poaching and disease, the Western lowland numbers have declined by more than 60 percent over the last 20 to 25 years. Even if all of the threats to Western Lowland Gorillas are removed today, scientists calculate that the population would require at least 75 years to recover. 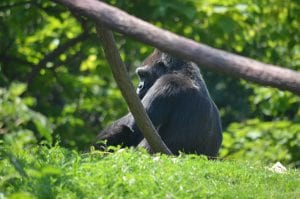 *Eastern Lowland Gorilla—also known as Grauer’s Gorilla—is the largest of the four gorilla subspecies. It is distinguished from other Gorillas by its stocky body, large hands and short muzzle. These guys share a sliver of territory with the Mountain Gorilla. Years of civil unrest in the Democratic Republic of Congo have taken their toll, though veterinarians that are a part of the Gorilla Doctors do frequently help as they can. This subspecies may now occupy only 13 percent of its historical range. There were nearly 17,000 Eastern Lowland Gorillas in the mid-1990s but scientists estimate that the population has declined by more than 50 percent since then. An accurate accounting of the animals has been impossible for many years because of violence in the region. 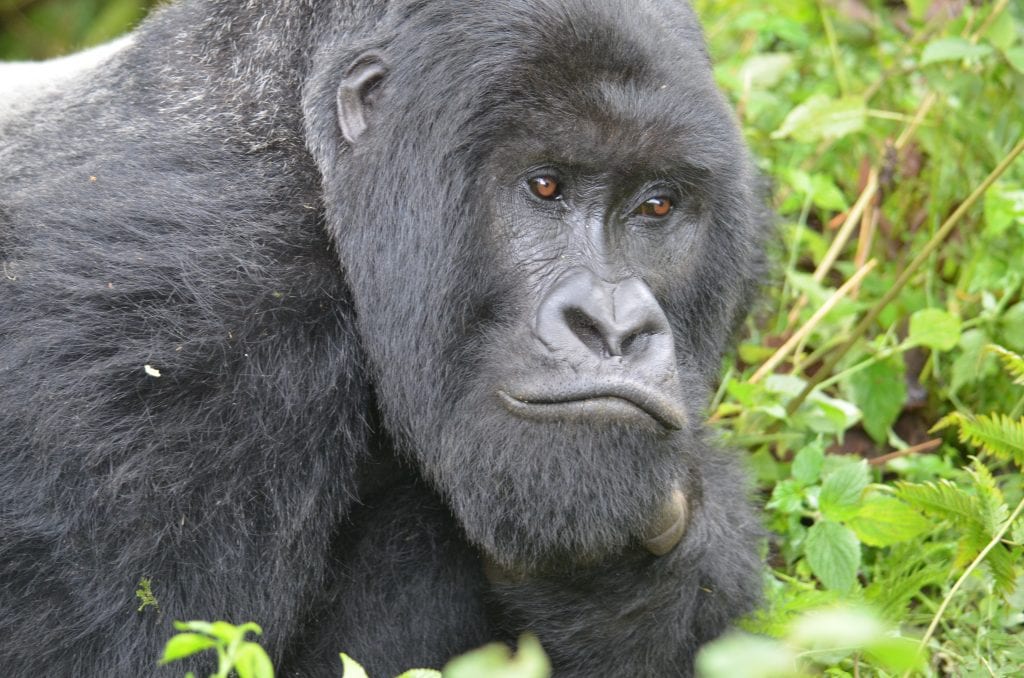 *Cross River Gorilla – This subspecies of the Western Gorilla is very similar in appearance to the more numerous Western Lowland Gorilla, but subtle differences can be found in the skull and tooth dimensions. Cross River gorillas live in a region populated by many humans who have encroached upon the Gorilla’s territory—clearing forests for timber and to create fields for agriculture and livestock. Poaching occurs in the forests as well, and the loss of even a few of these Gorillas has a detrimental effect on such a small population, not to mention possible future genetic issues due to the limited gene pool.

Ecotourism can have some unintended consequences. One example is how by bringing tourists so close to the same gorilla families, many which the late Dr. Dian Fossey habituated, we introduce novel germs. Not only do the Mountain Gorilla get sick, but living at their high altitudes makes it worse. That’s where the veterinarians, dubbed Gorilla Doctors, of the Mountain Gorilla Veterinary Project come in. Whether it’s a Mountain Gorilla with pneumonia in need of antibiotics, or a gorilla who has fallen from a tree and in injured, the vets swoop in and provide care. No doubt these veterinarians are playing with nature, but also humans and our germs aren’t a part of their natural environment. The Gorilla Doctors have do doubt been a significant factor in the species recent success.  Even if you can’t make the trek to Africa, perhaps you can support those who protect the Gorillas. The Mountain Gorilla Veterinary Project is a non-profit, and greatly depends on private contributions, as does the Dian Fossey Gorilla Fund International.

Ged Caddik of Ecotours has told me that people hike for an hour, reach a Mountain Gorilla family, who are all going about their business just feet away, and begin to weep. More than once elderly people have been carried up the mountain to see the gorillas. What is it about seeing gorillas?

As one person wrote on my YouTube page, “If Steve Dale can do it, I can do it.” I hope you do visit the gorillas in Africa (they’re unlikely to visit you).