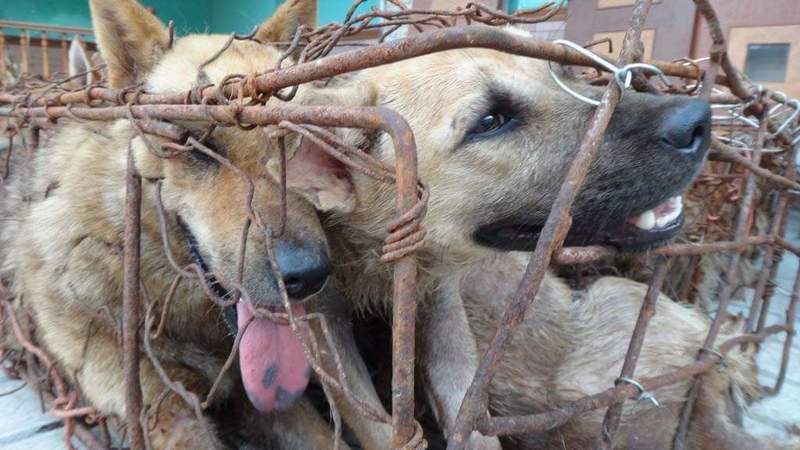 The World Small Animal Veterinary Association (WSAVA) created this statement, standing up against the dog and cat meat trade. WSAVA increasingly is willing to take ethical stands based on science and also in consideration of animal welfare and the human-animal bond.  In this instance,  also a potential public health risk (September 28 was World Rabies Day). Opposing dog and cat meat trade seems like a no-brainer, and it is – but do consider WSAVA consists of veterinarians from around the globe, including the Far East. More than just saying such trade is ethically wrong (of course it is), the WSAVA statement explains why it is wrong, and also potentially a danger.

The World Small Animal Veterinary Association (WSAVA) has strongly expressed its opposition to the dog and cat meat trade in a new position statement.

Prepared by members of its Animal Wellness and Welfare Committee (AWWC), the Position Statement recognizes cultural variance on this issue but voices strong concerns about the welfare of dogs and cats at all stages of the meat trade. It also highlights mounting qualitative and quantitative evidence documenting the public health risks the trade poses in terms of compromising regional rabies control efforts and increasing the risk of disease transmission.

The statement concludes by calling for the rigorous enforcement of existing laws and supports new controls and regulations where current legislation does not exist, aimed at banning what is typically an inhumane and dangerous practice.

Co-chair of the AWWC, Dr. Shane Ryan said: “WSAVA’s member associations are vital in highlighting animal welfare issues in their region. They work with the appropriate government or regulatory bodies to resolve gaps or short-comings in any system that has detrimental outcomes on animal welfare.

“We understand there are cultural sensitivities around this issue but, as an association focused on advancing standards of companion animal health and welfare, it is important for us to make a very clear statement of our position on the dog and cat meat trade.  We have serious concerns, not only about the welfare of the animals involved but, also about the potential health risks to the people who consume the meat.  We are committed to working with our members, with veterinary professionals and with all other stakeholders to achieve positive change through education and consensus-building.”

The AWWC is developing the world’s first Global Welfare Guidelines for Companion Animal Practitioners, due to be launched at the WSAVA World Congress in Singapore in 2018.   The guidelines will provide animal welfare advice and direction for veterinarians through all stages of the companion animal-veterinary interaction. WSAVA will promote awareness of the guidelines and encourage their adoption as widely as possible.

WSAVA represents more than 200,000 veterinarians worldwide through its 101 member associations and is focused on enhancing the clinical care and welfare of all companion animals.  Its core activities include the development of WSAVA Global Guidelines in key areas of veterinary practice. These guidelines aim to support veterinarians by setting standards of care and recommendations for best practice.  Vaccination, nutrition, pain management and veterinary dentistry are already served by WSAVA Guidelines.

WSAVA POSITION STATEMENT ON THE DOG AND CAT MEAT TRADE

The farming and trade of dogs and cats for human consumption are arguably amongst the most significant and contentious of contemporary companion animal welfare issues, particularly in areas of Asia and Africa.

An estimated 25-30 million dogs and an unknown number of cats enter this meat trade annually.[i],[ii]  Dogs and cats may be stolen (or purchased) from their owners, taken from the streets, or sourced from farms. These animals are frequently transported long distances and then inhumanely slaughtered.  Investigations have documented the severe cruelty inherent in all stages of the dog meat trade including sourcing, transport, sale, and slaughter.1–[iii]

The World Small Animal Veterinary Association (WSAVA) believes that dogs and cats are sentient beings and have the capacity to suffer. Whenever animals are under human care, their welfare must be ensured and their suffering prevented in every possible manner. We should always strive to ensure that the Five Freedoms [iv] are met:

The dog and cat meat trade encourages the mass and unregulated movement of unvaccinated companion animals both domestically and internationally. There is mounting qualitative and quantitative evidence documenting the public health risk the trade poses, in addition to compromising regional rabies control efforts.[v]  The trade, slaughter and consumption of dogs poses a risk to human health in the form of disease transmission, notably from rabies, [vi] but also from cholera and trichinellosis.[vii],[viii] Studies have revealed substantial incidences of rabies-infected canine tissue in restaurants, slaughterhouses, and markets in areas where dog meat is prepared and sold.[ix],[x]

Additionally, antimicrobial and other pharmaceutical / chemical residues are significant issues in dog meat. [xi] Dog meat rarely falls under food-hygiene or meat-sanitation laws and is not subject to controls at source nor testing before human consumption. This is therefore a veterinary public health concern, as well as a potential antimicrobial resistance issue.

The WSAVA is sensitive to cultural variances and recognizes that, while in western societies the consumption of dog or cat meat may be considered unacceptable, for other societies the consumption of dog or cat meat has not only economic but cultural and traditional significance.[xii]  However, due to the many animal welfare and public health concerns, the WSAVA strongly discourages the consumption of and trade in dog and cat meat. Instead, it encourages rigorous enforcement of existing laws and supports new controls and regulations where current legislation does not exist aimed at banning what is typically an inhumane and dangerous practice.